Mustafa Murtuza Raja – a teenager from the Dawoodi Bohra community of Vancouver – won the British Columbia 3-Star Under-14s tennis tournament held at the BC Tennis Hub in Richmond last month. 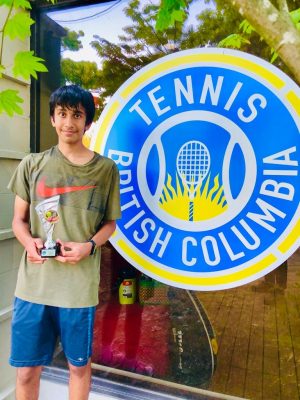 Competing in a knock-out tournament of the top 64 young tennis players in the region, Mustafa – a 14-year old nationally-ranked tennis player – did not drop a set in the four matches through to the semifinals.  In a tight and grueling final against the number one seed that lasted two hours, Mustafa eventually won 6-2, 5-7, 10-8.  This was the first tournament played in the region following the lifting of COVID-19 restrictions.

Health and fitness is a priority for members of the global Dawoodi Bohra faith.  Besides being a tennis champion, Mustafa also likes to play basketball and cricket, is a fitness enthusiast and foodie, and follows current affairs closely.

His ambition is to play at the Wimbledon Championships.

“I have loved playing tennis and competing all my life, and it would be a dream come true to play at the oldest and most prestigious tennis tournament in the world, to represent my country and my community, and to make my family proud.”

Mustafa has been winning tennis titles from a young age.  Originally from Mysore, Karnataka in southwest India, he started playing tennis when he was just a four-year-old, participating in tournaments from the age of six.  Along with his family, he moved to Vancouver when he was 12 years old, and has won over 40 tennis titles in India, Canada and USA.

Mustafa recently graduated from Como Lake Middle School in Coquitlam, BC.  Due to his outstanding achievements, Mustafa received a scholarship to attend the Rick Macci Tennis Academy in Florida, USA, in 2018.