Mustafa Raja, the 14-year old tennis champion from the Dawoodi Bohra community of Vancouver, was recently crowned victor of the Tennis British Columbia Provincial 5-Star 14-and-Under Championships in both the singles and doubles category, winning both tournaments without dropping a set. 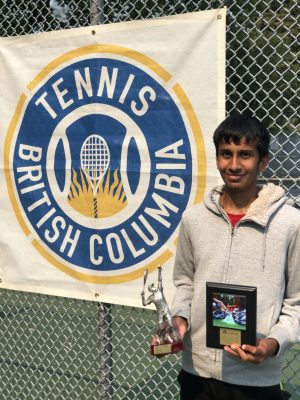 Following his success at the tournament, which was held at the Stanley Park Tennis Courts from 9th to 13th August, Mustafa tops the list in the points race to be selected to represent British Columbia at the national championships being held in Montreal in September, where players from all over Canada compete for the top prize.

Mustafa is now the number one tennis player in British Columbia in his age group, and is ranked number six in Canada.  He has achieved this feat despite having competed in only nine tournaments, the fewest among the top 20 players in Canada.

Like all Dawoodi Bohras, Mustafa is a hard-working student who prioritizes his education, health and fitness.  He hopes to attend Sullivan Heights Secondary School in Surrey, BC, after his summer vacations, where he plans to focus on social science and history while continuing his passion for basketball.